I am providing the content which I sent to the leadership group of each ASQ Section in Canada (and yes, I did have contact information for all 16 sections).

I am communicating some action items arising from the recent ASQ Canada leadership call on Feb. 20.  I hope that you will review this material and apply this in your respective Member-Leader activities.

I have captured and summarized some necessary guidelines and hyperlinks related to the following areas pertinent to your ASQ Sections.  If you have any questions or concerns, please do not hesitate to contact me.  For your benefit and convenience, I have copied this message to the contact people who can support your successful implementation of these items.  I encourage you to reach out to them with any specific questions, as they are all part of the greater ASQ team committed to your success as Member Leaders.

This refers to the operating requirements that all ASQ Member Units, including ASQ Sections, must fulfill as a condition for recognition by ASQ.  In the interest of transparency and governance, it is essential that ASQ Sections are led by named members who are paid up and personally in good standing with ASQ, and provide their financial reports and business plans in a timely manner according to the schedule and format below.

The ASQ provides ASQ Member Units in Good Standing with the opportunity to apply for a PAR Innovation Award, to recognize the delivery of member value to ASQ Members.  As an administrative contingency, I encourage all sections to complete and submit their Intent To Apply form by Monday, March 16, 2015.

As Member Leaders you have been requested to provide your responses to a study that will help to create effective Leadership Development programs within ASQ.  Please respond to the survey by activating the link below, which is also found within the Jan. 30 edition of ASQ Member Leader Friday Fast Facts (How Do You Define Leadership?).

One of the objectives of the Member Leader Training Team is to support member leaders through leadership development. Your participation in a brief survey will help define leadership for ASQ and provide the basis for the development of a leadership curriculum.

This summary, along with the attached presentation, provides your Section with a concise and workable approach to effectively engaging students into the ASQ Section.

Thank you for the opportunity to attend your teleconference monthly meeting on behalf of QMD. We are excited for these quality connections with the sections and future leaders in quality, our student members. Quality is cross functional and what better way to engage many different disciplines than to start at the colleges and universities sharing applicable quality?

It was great to hear about the focus on students in Hamilton… Lets work to get the students to experience the magic of quality! Free conference registration, scholarships & honorariums, publication opportunities, and establishing quality connections all add value to student members as well as adding diversity to ASQ. Please share the information with your local colleges, universities, communities, and family.

Do not hesitate to reach out with questions, comments, or ideas about supporting student members.

This is the summary of the ASQ Career Center, which communicates job openings through Social Media, and can be integrated with the Section communications.

The ASQ Career Center is part of the Engineering & Science Career Network which is made up of 40 engineering and science associations to create one board geared towards the quality, engineering & science professional.  By posting on ASQ’s job board you are gaining access to our niche market of job seekers and members (74,000), plus you are able to search over 24,000 resumes.  The combined reach of the 40 associations is 850,000.  Your job posting is also fed automatically to ASQ’s LinkedIn and Facebook pages.

Posting the positions online:
Rates: The cost to post a job is (USD) $295 member - $495 non-member for 30 days.  Other packages consist of purchasing 60 day posting, or bulk job posting packages to use over the course of 1 year.  We also have a “Featured Jobs” option, which highlights your job on the site for an additional $125/$225.   Membership to ASQ starts at only $99 per year – so it’s well worth the membership fee just for the discount.  However, membership does offer you a lot more.  As a FULL member you also have access to network with local professionals (your Section) as well as industry specific (Division or Forum) members from around the world.

If you have not posted with us before, you will need to register as a new employer. The system walks you through the posting process and will ask for credit card (MasterCard, Visa or American Express) payment at the end.  Visit our Career Center at http://careers.asq.org/website/employers/steps123.cfm

If you’re looking for several Employees, you may be interested in exhibiting at ASQ’s World Conference on Quality & Improvement in Nashville, TN.  We have an add on package available for any Exhibitor looking to hire.  It’s a great opportunity to meet several qualified candidates in one location.  http://asq.org/wcqi/2015/exhibitors.aspx

Posted by Daniel Zrymiak at 8:20 PM No comments: Links to this post

Well, it is not often that I find my opinion at a divergence with the sentiments expressed on View From the Q, but the recent article about The Globalization of Quality frankly expresses a viewpoint with which I cannot in good conscience agree, nor let stand without a counterpoint.

The official message is that ASQ, by virtue of its Quality Body of Knowledge (QBok), is undertaking the grand initiative of propagating Quality from the United States to foreign countries.

The facts suggest a different narrative.  Within the recent history of ASQ, the recognitions have trended away from the traditional American "good ol' boys" and more toward the international participants, as well as those who have traditionally suffered from systemic discrimination. Consider the following trends:

- Of the recent 15 new ASQ Fellows, 5 are located outside of the United States.  Although the percentage of Global membership is smaller, fully 33% of members at the highest level originate from those very countries and continents that ASQ aspires to enlighten.

- The International Team Excellence Competition profiles the successful teams at this website.   The victorious teams originate from diverse locations including Dubai, Argentina, Malaysia, South Africa, India, China, Thailand, Mexico, and the far reaches of the inhabited world.  The best examples of applied Quality practices demonstrate that Quality is global, and is not restricted to any particular culture or geography.

- The ASQ Feigenbaum Medal not only recognizes an accomplished quality practitioner at or under 35 years of age, it serves as a predictive indicator of future ASQ leaders.  It is interesting to note that among the Feigenbaum Medal recipients, there are no "good ol' American boys".  This progressive award has acknowledged the contributions of members originating from foreign nations (outside of the USA), visible minorities, and women. There is no affirmative action mandate - the criteria for this award has remained true to the edicts and ethics of Dr. A.V. Feigenbaum, and recipients possess the virtues and credentials valued by ASQ.

I predict that in 10 years (or sooner), the composition of the ASQ Executive team, Board of Directors, and leadership councils (SAC, TCC, GAC) will reflect the cosmopolitan nature and global diversity of ASQ's membership, and will have even greater representation of females, internationals, and visible minorities, not from mandated affirmative action or diversity quota, but from superior merit and ability.

In contrast, ASQ still operates as a regional enterprise,  For ASQ to be truly global, it must first arise from its regional limitations and service gaps affecting North America. which include:

- The Customer Care department is staffed from 7AM-5PM Central time.  This permits ASQ to provide the necessary services to members during core business hours in Eastern and Central time.  However members in Mountain and Pacific time zone do not have similar convenience for their membership dollar.  A better approach would be for ASQ Customer Care to provide live agents during business hours for all of North America, starting at 8AM Eastern and finishing the day at 5PM Pacific.

- There is an ASQ section (404) which is specifically targeted for the French-speaking population of Montreal, Quebec.  Quebec is a Canadian province which has French as its primary language.  While ASQ offers itself as a professional society for Francophones, it does not employ anyone in its Customer Care group who is fluent in French (one of the official languages of the North American country of Canada).  It would seem that before ASQ extends its capabilities to overseas members, it should aspire to adequately address its membership base in North America first.

In my role as a Regional Director for Region 4 (Canada), which includes Quebec and the Mountain and Pacific time zones, I have proposed the expansion of ASQ's Customer Care to address these specific Service Quality gaps.  Unfortunately I have not encountered anyone at ASQ willing to take ownership for the timely resolution of these service limitations.

In his post, ASQ CEO commented on the service expectations for the global Quality community, and the question as to whether ASQ is doing enough to accomplish the mission.

"Given that, we have an obligation to serve our global members. We want them to feel welcome, supported, and listened to.  In some cases that meant we needed a presence on the ground to better understand and serve their needs."

"This month my question to you is: ASQ’s mission statement talks about increasing the use and impact of quality in response to the diverse needs of the world?  Are we doing enough, throughout the world, to accomplish that mission?"

Well, for ASQ to have an adequate presence on the ground globally, it must first meet the inherent challenges present in North America.  If this cannot be reasonably accomplished from Milwaukee, then an expansion or relocation is necessary to ensure adequate coverage of all of the "nations" within North America.  Based on the existing service gaps, only 7 of the 11 nations are fully served by ASQ Customer Care, with New France, the Left Coast, the Far West, and El Norte getting the short end of the deal. 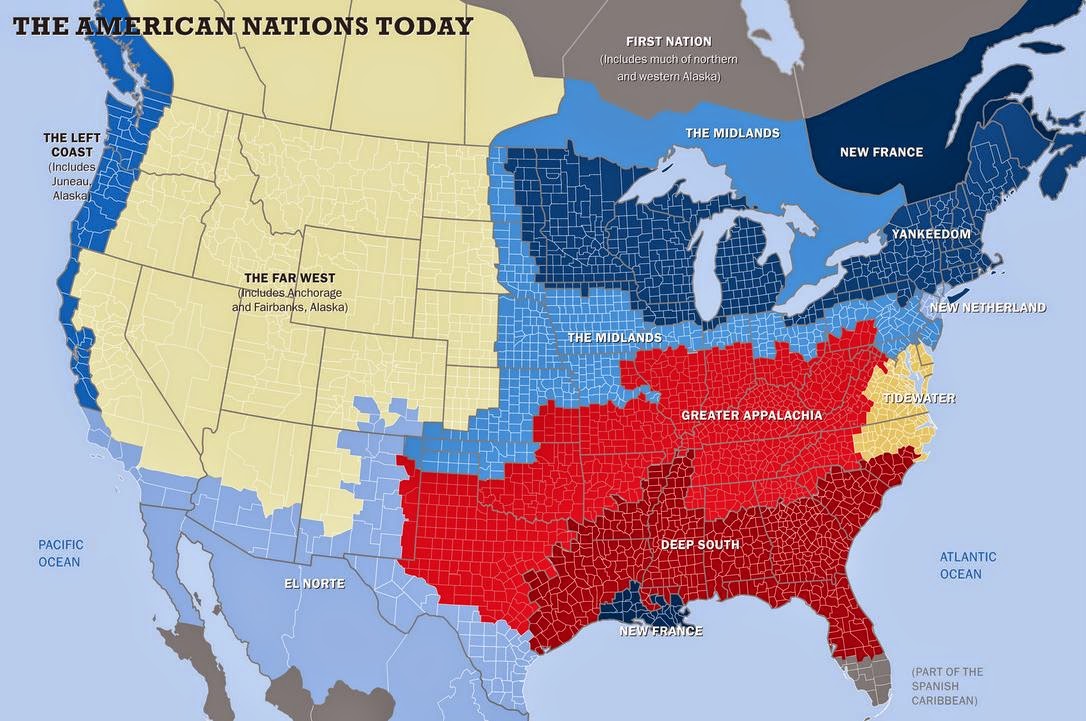 Posted by Daniel Zrymiak at 9:54 PM 2 comments: Links to this post